First we’ll need a way to track which party the Senate & President are part of. For now, let’s just stick with the two major parties and create a Party enumeration. Enumerations can group and give names to related constants in the code. This can help the code be more understandable when reading it.

We’ll also make a class to represent each justice. When a new Justice is created for a party, they’ll be given a randomly generated term of somewhere between 0 and 40 years.

Our lass class is Bench. This class will represent the bench that contains the Justices currently on the Supreme Court. When the Bench is first formed, it will be empty. We care about modifying the Bench in a few ways:

Empty seats in the court are represented by None, and judges are removed when they have <= 0 years left in their term.

Last but not least, simulate is where the magic happens. This function loops over a supplied number of years, first determining if any judges have left their position. After that, it randomly picks the winning parties for any elections that are happening. After the elections, if the government is aligned, empty seats on the bench should be filled by that party.

First, let’s look at the result of our simulated supreme court over 200 years. Along the bottom, the parties of the Senate and President are shown. The height of each stack represents the number of seats that party holds, and the white space indicates vacancies. 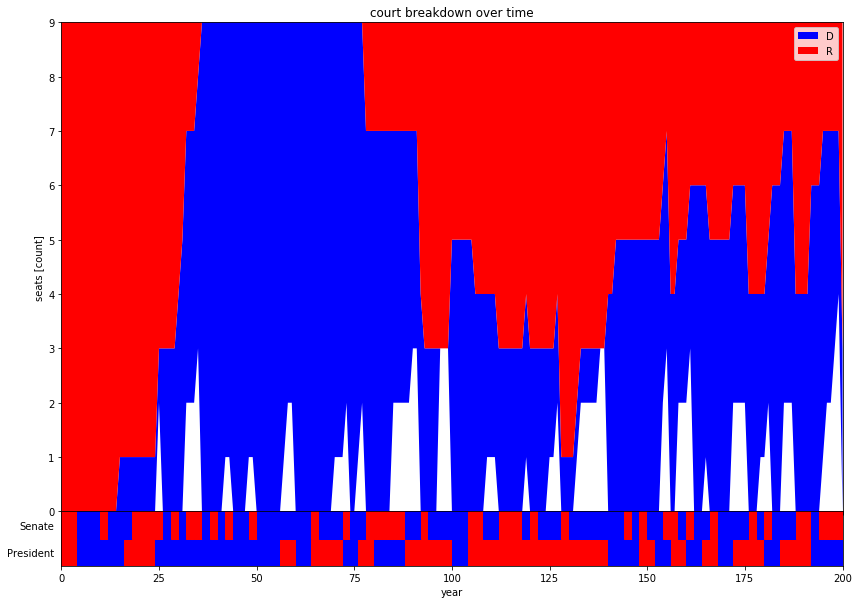 During the periods of alignment, the vacancies (white spaces) as filled. This just serves as visual confirmation that our simulation got that aspect correct. We can see that seats are continuously being vacated and filled, so we can’t learn much from just this one plot.

As an aside, it’s difficult to look at this and not imagine potential storylines! In the beginning, an initially 100% Republican court slowly retires over time. In the mean time, the two parties fight for control of the Senate under continuous Democratic presidencies from years 25 to 50.

But enough of that, let’s get back to the numbers. Next, let’s simulate over a longer time period, 1000 years, and view the cumulative average number of vacancies.

This simulation shows that we should expect a little less than 1 vacancy, about 0.7, per year. It also illustrates that as more data is added, the cumulative moving average becomes less variable.

However, this is only a single simulation run, and could be an outlier. To see how likely different numbers of vacancies are, let’s run a Monte Carlo experiment. In this experiment, we’re going to run 1000 different simulations, each to 50000 years. 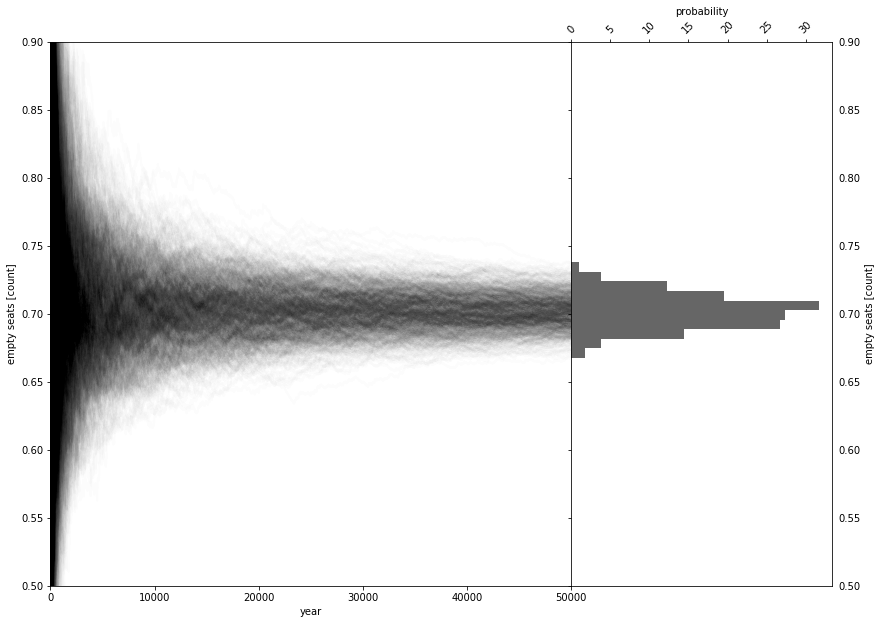 This distribution shows that we should still expect to see ~0.71 vacancies per year over the long run, but it wouldn’t be surprising to see 0.68 or 0.73 vacancies.

As a thought experiment, let’s see what happen if the Green Party suddenly launches into relevance and all 3 parties have an equal shot in elections. How would this impact the result? 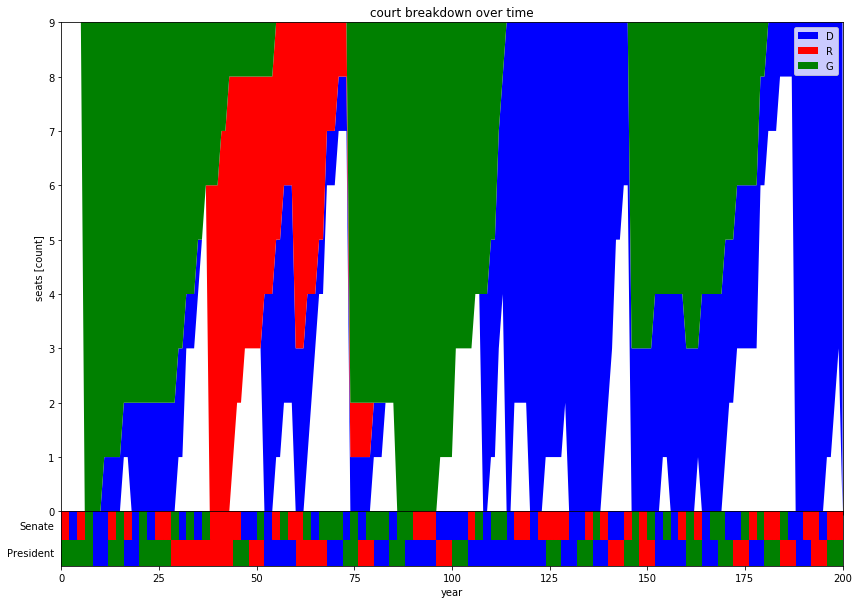 Unsurprisingly, adding more parties into the mix while still requiring an aligned government looks like it leads to even more vacancies. But, how do the numbers shake out?

It appears that under our theoretical three party government, we should expect almost twice as many (~1.35 compared to ~0.71) vacancies in the long run!

Well, I hope you enjoyed reading! I’ve added some extra credit reading from others below that have analytical approaches to the riddle as well.