1. There are a limited number of states

Each driver starts with 0 tickets and stops receiving them after their 3rd. Because there is a cap on the amount of tickets, and a fixed number of drivers, there is a finite number of ways that tickets can be distributed amongst our drivers.

The actual number of states is the number of ways that 0, 1, 2, or 3 can be arranged, with repetition, across the 4 drivers. With 4 possible ticket amounts over 4 drivers, this will result in \(4^4\) or 256 unique states.

2. The probability for a driver to be ticketed depends only on the state at that time

If Driver A and Driver B each have 1 ticket, the probability that Driver C will receive a ticket is the same no matter which order A and B received their tickets. The only factors that influence each driver’s probability of receiving a ticket are:

3. The end state can be reached from any other state

If I selected any possible distribution of tickets, it’s possible to reach the end state by issuing more tickets. No matter which state we pick, we can always make our way to the end state in a finite number of steps. This is probably the most abstract of all of these observations, but it’s important to the solution, so stick around!

Why do those matter?

These observations are important because they provide some restrictions on how our scenario works. These restrictions mean that a Markov chain might be a good method to solve this problem. A Markov process is a process with some randomness that doesn’t depend on previous state, i.e. it is “memoryless”. A Markov chain is a way to represent one of these processes, given it has a finite number of states.

A common example of a Markov chain is the board game Snakes & Ladders because:

In general, Markov chains are good at modeling board games involving dice. Analyses exist for at least Risk1, Monopoly2, and Snakes & Ladders34.

In our riddle, observation 2 provides the “memoryless” criteria and observation 1 shows that there is a finite number of states. It’s looking good that we could use Markov chains to solve our riddle.

Let’s pretend tomorrow’s weather depends only on today’s weather, and there are only two types of weather: rainy or sunny5. The weather follows these patterns:

The Markov chain for this scenario looks like this: 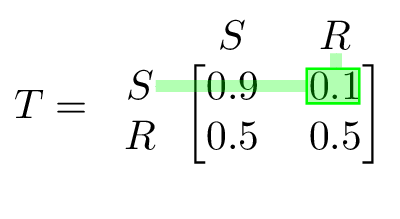 I’ve highlighted one transition in the chain and its corresponding entry in the matrix as well to illustrate how the transition matrix is set up.

You might be wondering how we’re going to relate this foray into Markov chains back to our riddle.

The key insight is that the parameters of the riddle mean we can model our riddle as a Markov chain. Each distribution of tickets is an individual state in the chain, and each transition between states represents a single trip. By calculating the probabilities for all the possible transitions, we can make a transition matrix that represents the drivers taking trips until they’re all suspended.

Now we need to start calculating probabilities. In particular, we’re interested in the probability that a driver gets a ticket, given an initial state.

We know that for each trip, there are \(x\) available drivers, where \(x\) is the number of drivers that do not have 3 tickets. This means each eligible driver has a \(\frac{1}{x}\) chance of being selected to drive that trip. Additionally, we know that each driver has a probability \(p\) that they will receive a ticket if they drive. This means that for each trip, before the driver is selected, the probability that an individual driver will be ticketed is \(\frac{1}{x} \times p\).

Transitions are only possible between two states where exactly 1 ticket has been issued to exactly 1 driver, or no tickets have been issued. The probability that no ticket will been issued can be found by summing all the probabilities that each individual driver will be ticketed and subtracting that from 1.

Give an example already!

To make things easier to visualize, let’s modify the problem slightly. Instead of our original problem parameters, assume:

Given these constraints, the possible states of ticket distribution amongst our two drivers are:

By using our formula from above, we can calculate each possible transition and draw out our Markov chain. 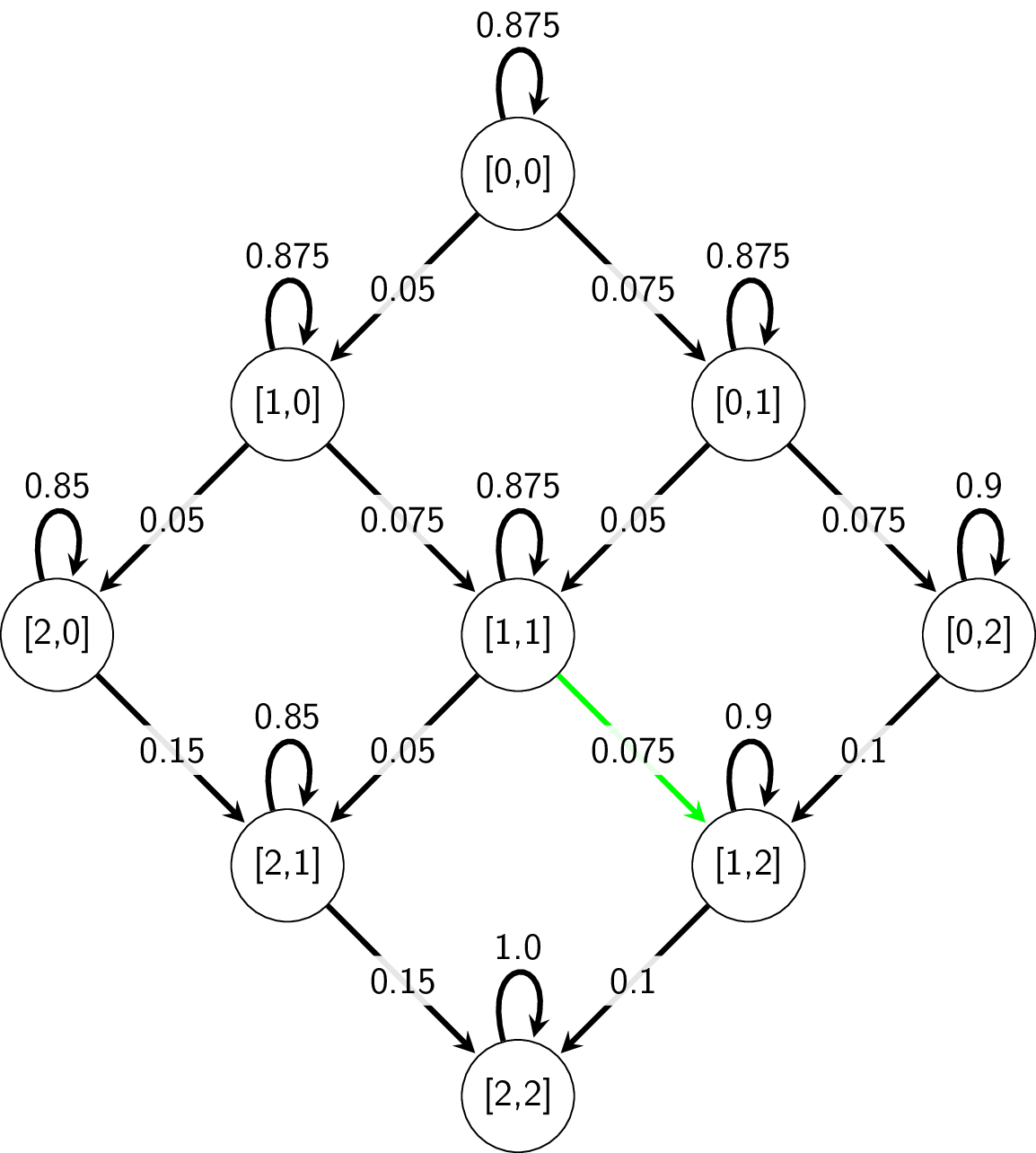 and the corresponding transition matrix:

Again, I’ve highlighted a particular transition in both the chain and the transition matrix, to make it clear how they relate.

The higlighted transition shows that if Driver A & B each have 1 ticket, at the start of a trip, before the driver is chosen, Driver B has a .075 probability of receiving a ticket on that trip.

We can double check that our translation matrix is plausible by confirming the following assumptions:

Well, now we have a nice matrix that represents how likely it is that tickets might be issued to the drivers, but how do we turn this into an expected number of days?

Now is when observation 3 will help out.

Observation 3 allows us to use an even more specific Markov chain called an Absorbing Markov chain. A chain is abosorbing if:

The advantage of having an absorbing state, is that the transition matrix can be put into the following form:

\(Q\) is the transition matrix between the non-absorbing states.
\(R\) is an array of probabilities of entering the absorbing state from any of the other states.

So how does all of this actually get us a number? We just need to run through a few more calculations to arrive at the answer.

The fundamental matrix \(N\) represents the expected number of times the chain is in the column state, given that the chain started in the row state.

From that, we can get \(E\), which is the expected number of steps to get to an absorbing state, starting from any other state.

In this case, \(E\) tells us, for each possible starting state, how many trips we should expect before all drivers are suspended. The important one for the riddle is [0, 0]. For our reduced example, we should expect 33.33 trips, or ~16.5 days for both of our drivers to be suspended. If both of our drivers started with 1 ticket, it would take exactly half as long, or a little over 8 days.

Now all that’s left to do it perform this same calculations on the original problem parameters of 3 tickets to suspension and all 4 drivers. With our 256 states, showing any visuals is quite difficult. Running through the numbers shows that we should expect all drivers to be suspended at 38.5 days.

For processes that run in discrete steps and can be represented by a fixed number of states, Markov chains are a great way to learn about how the system evolves and to calculate useful properties about it as well. I hope you learned a bit, and be sure to ask me any questions if you have them!

The python code I used to perform the number-crunching is below.